Last time Bucky played Sparty in Indianapolis, the Big Ten Title was on the line.  It was football.  But the game was classic.  Gus Johnson called the game and was in top form.  Montee Ball had 4 TD’s, their was a late Hail Mary from Wilson.  But everyone will remember this play:

That game was December 3rd.

During our trip inside Lucas Oil, we were able to go into the Visitor’s locker room, which was going to be the Giants for the Super Bowl but was also the Badgers for the Big Ten title and was also the Tennessee Titans and Houston Texans on back to back weekends also in December.

We were a little surprised when we found this 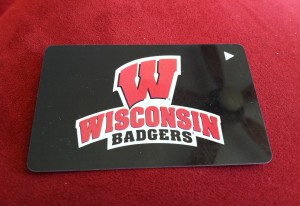 laying on the floor in the coaches room just sitting there.  Two months later, two other games later.

The boy turns 10 and it would only be fitting that we travel as a family and do something fun for it. We traveled to Indianapolis for the NFL Experience in the Indianapolis Convention Center and then had a tour of Lucas Oil Stadium the next day.

We had a spectacular time and there was a ton to do.  In a way it was a blessing that it was only in the low 30’s otherwise we could have stayed two more days to do more of the outside activities.  So much fun that we discussed going to this event when it is held in other cities.