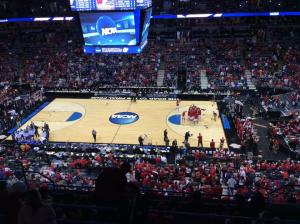 Those that have known me for some time, March Madness is one of my favorite sports events.  Opening of College/Pro football season, any lazy Saturday at a ball game, High School Swimming State Championships, and March Madness.  And when the opportunity arises to attend any of those, I take the opportunity to jump on it.

And that was the case yesterday for the 2nd round games at the BMO Harris Bradley Center in Milwaukee.  I think this was the 4th or 5th time I have gone to the games at the BC.

But this blog has nothing to do with the games.  This has to do with technology, and how poor the consumers in the sports world are treated when it comes to internet access.

Other industries have caught on and have catered to some extent to the consumer.  Look at the airline industry and airports.  Some require paid service, some have free service; yet they have extended support to the consumer with charging stations as well.  Fast food has figured it out as well.  Any Culvers, Chili’s, McDonald’s — all with free WiFi.  Department stores like Target also have it figured out.

Why is it taking so long for sports to figure it out?

Yesterdays games were atrocious when it came to knowing the stats of our game, and the stats of the other games all being played at the same time.  The Highlights from other games happened close to 25 minutes earlier when the score and outcome were already determined.  There was 27 minutes in between games in both Session 1 and Session 2.  Why were not shown other games on the scoreboard.  CBS and the NCAA own every aspect of this, so put them on.  The scoreboard showing the “Out of Town Scores” was posting the wrong scores.  ((NDState beat Oklahoma, but you would never know looking at the scoreboard))

I am sure that the almighty dollar and naming rights is the ultimate answer.  But in the mean time, the consumer is taking it in the shorts. 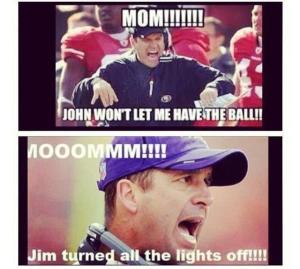 A week after the Super Bowl and watching the Harbaugh brothers throw tantrums on the sidelines that past month at epic proportions, we have now reached a tipping point where poor behavior from coaches and fans is become more of the norm rather than the exception.

And as a parent, coach, and fan – I have had enough of it.  Because from my vantage point, the only person that loses during this is the student athlete.

I am not sure what my full plan of attack will be to correct this, and I am not if this will be a one man crusade or not.  But I will do my best to correct it.

Going to the Sportsmanship Summit was a good start.  But I think we need to do more.

And here is why.

I recently sat at the scorers table for a JV basketball game waiting for the Varsity game to start.  The official made a call in the early part of the 4th quarter that went against the visiting team.  Some of the visiting parents siting behind the scorers table did not agree with the call.  In fact one parent did not let it go for the next 5 minutes.  Enough so that some of people from his own team asked him to keep it down.

Then the downfall.  The official came over during the next time out to the scorers table to check on timeouts remaining.  The fan was still yelling at the same official.  The official made the mistake of responding, and then the banter picked up to yelling.  I had to intervene and stop the fan from yelling.

I worked the varsity game after and was still a little worked up about the event.  When I got home I started looking for scores from other high school games when I came across this tweet with a video link from Ryan Ellerbusch:

Referees and a coaching staff involved in a confrontation during a @wiaawi boy’s basketball game tonight. VIDEO HERE –

Ryan is a Co-Editor/Videographer/Writer Midwest Baller.  He add I had a good discussion after I told him my story and watched this video.  He has some good insight.  I would recommend you follow him on twitter.

Not sure we need to go much further than this for you to see why I need to figure out how to make this better.

Bucky comes back strong against Nebraska to win the Big Title Championship game.

Packers lose to the Vikings to gain a first round bye

I am exhausted.  I have watched each game.  Put on all the team apparel l I have for each one of these game.  And now I need to get ramped up on four days rest for a NFL playoff game??

Not too mention I now need to start supporting the Badger basketball team.

Being a fan is a tough job, but someone has to do it!!